Over spring break, this past week, our high school students had the opportunity to serve others. They loaded up the vans with four of our house parents, and traveled to Chicago. Throughout the week they served at Pacific Garden Mission, a ministry that serves the homeless in the downtown Chicago area. They helped by making hundreds of beds, serving hundreds of lunches, and resetting the dining room for dinner each day. The mission does not only function as overnight housing for guest, they also have long-term programs that help people get back on their feet. These programs include intense Bible studying and teaching basic life skills to those in the program. The kids worked each day with men who are in the New Life program. These men oversee almost all the functions of the mission and supervised our group during our time there.

Each day we began with a devotion, led by the students. As the week went on, all of the students expressed how impressed they were with the men we were working with. Most of them shared how fortunate they felt to have a place like Show-Me that has stepped in to help take care of their needs. They realized that with out Show-Me their life could have taken a very different path, probably not much different from many of the men we encountered. Through serving these men, women and children the kids had the chance to experience something they will remember for quite sometime. We hope to give our kids many more opportunities like this in the future. 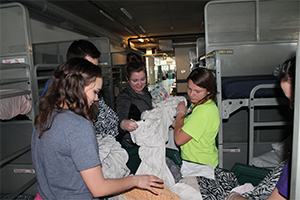 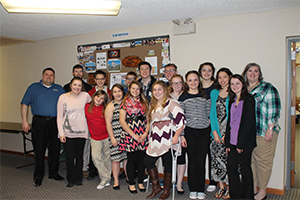 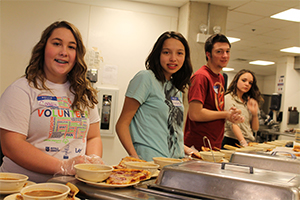 For many of the 2,000 children who have called Show-Me “home,” the path that brought them here was treacherous—one filled with neglect, fear, and uncertainty. Some have been homeless, some have parents in prison, and some of the kids got in trouble with the law themselves where Show-Me was their only alternative to juvenile detention. For others, their guardians’ just felt like Show-Me could provide them with a better life than they could on their own.

Jerrica’s journey is a fairly typical case. She joined our Show-Me family when she was 14 years old. By the time she reached our doors, she had been placed in home after home staying with countless faces. Nothing seemed to work out. “My whole life was a mess. Nobody wanted me. Nobody trusted me. I had burnt all my bridges,” remembers Jerrica.

The thought of graduation and a positive future seemed an unachievable goal. “I never believed I would make much of my life,” said Jerrica. “The idea of graduating in 2012 seemed a million years away. I kept telling myself that I was never going to make it. I should just give up and drop out now.”

Life at Show-Me wasn’t easy at first. Her rebellious attitude and distrust of everybody and everything made “fitting in” difficult. In her eyes, no one seemed to want her. Searching for acceptance, she acted out to try to be “strong” and “hard.” But, her Show-Me houseparents, Jeff and Jessica Weber, would not give up on her. They accepted her for who she was, not how she acted. She became a part of their family providing her with a structure and stability she never had before. That love and guidance changed Jerrica. She began to trust others and with that trust, slowly, came change.

Jerrica has now blossomed. She is active in her youth group, loves to help with the other kids on campus, and always has a smile on her face. She finished her studies early and will not only graduate, but receive her diploma with honors after managing a 3.5 GPA.

Our new Path-to-Purpose program has helped unite her passion for kids with a solid plan and set of resources. She has earned a number of scholarships and is working this summer at a nearby Christian camp to help with school expenses. She will start college in August at Central Christian College of the Bible in Moberly, Missouri working toward her degree in Elementary Education. She hopes to teach Second Grade and make a difference in children’s lives.

“I don’t like thinking of where I would be if it weren’t for God. Before, I dreaded each day. I didn’t know what I would do, who I would meet or where my mom would take me. Now I feel safe and secure,” exclaimed Jerrica. “For the first time, I am excited about the next part of my life and ready to get there. I know it is going to be a bright future and I know I have a huge family who always has my back!”

Shambrishia’s Story: A Family of Her Own

Shambrishia Jones appreciates her family more than words can say. She knows what a blessing they are, because she knows what it is like to be separated from your family and not have a place to call home.

Born to parents who were too young to care for her, she spent the first few years of her life with her grandparents. After five years, they decided it was time for her parents to be responsible for her and her three siblings. Her mom and dad struggled to provide any stability. She remembers, “we moved around a lot, living at homes of my aunts and uncles and with people we did not know. We lived in cars at times and were always going to lots of parties.”

“All the foster homes that we stayed in were short term — some were for a year, for others it was only months until we had to move to a different (foster) home and begin again,” said Shambrishia.

Six years and six different foster homes later, her case worker came to her with the news she had been waiting so long to hear. She had finally found her a place where she and her sister, Yoshi, could be together until they were grown. That place was Show-Me Christian Youth Home.

“Not only did Show-Me allow me to be a part of the Show -Me family, they also gave me a loving, caring, patient, understanding family to call my own.”

After graduating from high school, Shambrishia attended Ozark Christian College, and then returned to Show-Me to provide daycare for the little ones and serve as a relief houseparent. Miss Brishia is still remembered for her big smile, contagious laughter, joyful spirit, and a hug for all the children that spent time in her home. “I wanted to show each of these kids the love of God just as I experienced it growing up here,” she said.

In 2008, God spread that love across the United States when she married Derrick Jones and moved to Maryland to start a family of her own. Their family grew and now includes a daughter, Alayna. Miss Brishia continues to help children at a local public school as an Additional Adult Assistant for children with autism.

“I learned from Show-Me how to be patient with people and make sure I show them that I care about them,” said Shambrishia. “What impacted me the most was the love that Show-Me has for each child no matter where you came from, what brought you to Show-Me, your race or disability. Show-Me accepted me and showed me love — God’s love. As a child that made me feel safe, secure and stable. It showed me that everything was going to be okay. That is what I needed.”