A Love that Never Quits

The Miraculous Power of Second Chances

Dante knew something was missing in his life. Every waking moment he had been searching for it because he knew it was the critical piece he needed to fill the empty, painful void that tore at him inside. The void that reminded him of his pain, loneliness, and worthlessness. Watching from afar, he had seen glimpses of people who must have found it: the girl at school who never judged him because of the smell from his clothes, the genuine joy that he saw on the people coming out of the church across the street, and the families he saw laughing as they played at the park. Why could they find it and it remain so elusive to him?

He must be broken. Why else would a 15-year old that so many others called “extremely smart” be such a failure? It had to be the case. His parents abandoned him. Foster families couldn’t deal with him. Even the families that talked about God and His love for Dante still didn’t want him. It was the only reason that made sense to explain the events of his life. Why else could nobody love him?

Now, after they caught him again trying to run away, he found himself in the psychiatric hospital for the third time. Years of heartache, pain, confusion, and instability had driven him to the point where he could no longer find a purpose for life on earth. Then, news came. One hopeless young man would give life one last shot…

Dante’s childhood was filled with instability. He was born to a mother who was addicted to drugs. Knowing she was unable to raise him, she tried to put him up for adoption. Unfortunately, the mandatory DNA test needed for the process brought into Dante’s life a danger she was desperately trying to keep out.

At the age of two, he and his younger brother were removed from her home and sent to live with their alcoholic, abusive father. Over the next five years, Dante stayed in numerous houses as his father was continually on the move outrunning authorities. Dante took on a parental role, trying to care for his little brother as best he could. At the age of seven, the law caught up and he was placed into foster care. Shuffled between homes, he usually never stayed in a place more than six months.

With each move, each rejection by those who said they cared and would love him, Dante withdrew more into himself. ‘Family’ and ‘love’ were just words, not real things.

“Each place just felt like another four walls,” Dante recounted. “There was no special relationship. I was not their child. Another mouth to feed so they could get a paycheck. Nobody loved or wanted me. Time after time, when I got to be too much to handle, the foster family would just get rid of me.”

Life had taught him that he could not trust others, only himself. That was fine. He would play their game and go through the motions until they were ready to throw him out. He stole food from the kitchen and hid it away in his room or backpack. He acted out, pushing people away before they could reject him. He did not want to interact with other kids at school, fearing that if they got too close they would see how broken and ugly he really was.

In 2009, eight-year-old Dante and his brother were ordered by the courts to live with a relative in Missouri. Things did not get better over the next seven years. Conflict, abuse, and chaos filled the house. As he grew in size and age, the lonely boy spilled over into a depressed and angry young man. Each day left Dante feeling more broken, out-of-control, and worthless. He had thoughts of ending his life and tried to run away multiple times. Counseling. Medications. Hospitalizations. Dante had tried it all and nothing seemed to help.

In 2016, his counselors reached out to Show-Me as a last hope. Even if Dante didn’t believe it, they had 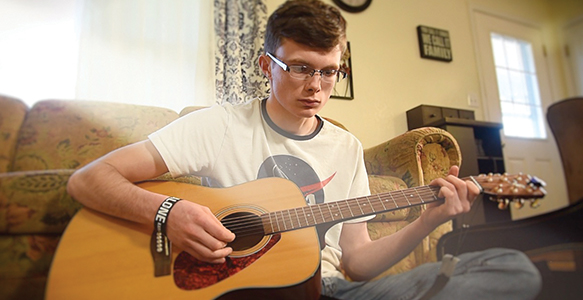 faith that this young life could be rescued and restored to a future of success if he had the right supportive environment and a loving family to guide him.

“My first impression [at Show-Me] was that it almost seemed fake because of how well I was treated,” recounts Dante. “I kept watching for the inconsistency. But, it never came. It was the exact same every day. Everyone showed me love and care in this entire community – from my house parents all the way down to the volunteers.”

The skeptical teen didn’t know how to react in this strange new setting, so he reverted to his self-sabotaging survival instincts: hoarding food, lying, arguing, and closing off. “I was not a pleasant kid,” admitted Dante. “I did a lot of dumb things. I had so much anger about my past. Most of all, I hated myself because I believed the inner voice that told me all the hurt in my life was my fault.”

Dante’s defiance escalated to more dangerous activities. Something had to change. “He was doing everything he could to try and force us to dismiss him,” said Rachel Reynolds, Children’s Services Director and long-time house mom. “But, we all felt like Show-Me could not give up on this kid. We had faith that we could still help him and knew he had nowhere else to go.” Believing a fresh environment could give him a clean slate, the difficult decision was made to have him join the Carman Family at the Drysdale Campus.

Quitting is Not an Option

Things didn’t magically change. “Dante was a difficult kid, but we committed to fight for him so he could have the love and stability everyone deserves,” the Carmans expressed. “The Lord put it on our hearts that giving up on Dante was not an option.” 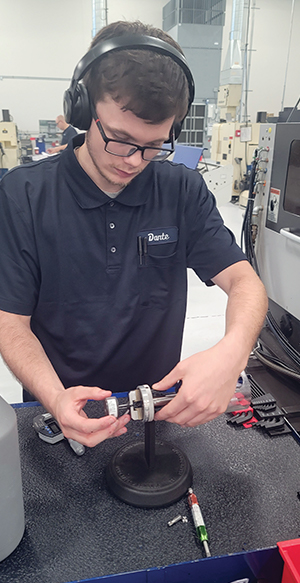 Like most kids who grow up in chaotic homes, he tested boundaries trying to add instability in order to create a more familiar environment. The Carmans remained consistent: in the way they treated both their biological and Show-Me children, in how the rules were enforced, and in the love they showed.

Dante knew that he did not have to accept the Christian faith to be at Show-Me, but he did need to be respectful of it. Unknown to him at the time, God was planting seeds as he listened about God’s love while participating in family activities like daily devotions, church, and camp. “Before Show-Me, I knew of Jesus and His love, but I didn’t understand it because I had never had an example of it,” stated Dante. “It didn’t change the people who told me about it, so why should I want it.”

The Son would bring those seeds to life at Dante’s lowest point. A few months into his stay with the Carmans, Dante forged a note and got on a bus prepared to run away. Fortunately, his attempt was derailed when the bus driver, a local youth minister who knew the Carmans, alerted the family. “I just knew this was going to be the final straw,” said Dante. “The moment their love would quit. Instead, they hugged me and told me that I had made a dumb choice, but it doesn’t mean that they love me any less.”

Something inside Dante changed in that moment. “I came to know the true love of God,” Dante stated. “Not just for others, but with the tough and constant love of my mom and dad, I experienced this love personally.”

Secure in that love, he began to embrace the opportunities surrounding him. The Show-Me school helped him catch up and graduate on time. Path to Purpose identified a college and career in precision machining that fit his personality and meticulous nature. The sports and the Leadership U programs grew his confidence. Most importantly, he realized that if others saw something in him to love, then maybe he wasn’t broken after all.

“The more I saw, learned, and felt that love from the Show-Me community, the more I wanted it for eternity, stated Dante. “I wanted that thing that allowed my parents to love me in a way that humans can’t.”

With hard work and guidance, Dante turned his new found hope into a solid future. In 2018, Dante was baptized. In 2019, he graduated from high school. This spring, he received his college degree in Precision Machining Technology. Thanks to a summer internship, he had a full-time job waiting for him to start in May. 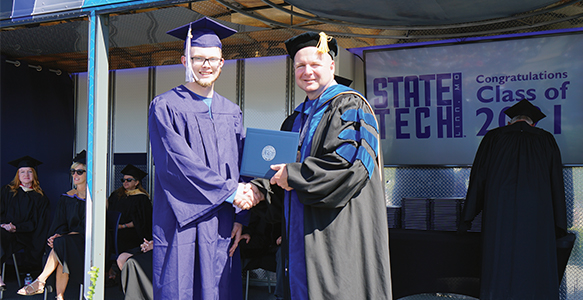 “It seems unreal at times, Dante said standing on the front porch of his house. “If I had not come to Show-Me, I am not honestly sure I would have a life. My second chance gave me more than I could ever repay. It gave everything: a new outlook on life, the family I always wanted, and a love that will never end.”