Overcoming Obstacles in the Arena and in Life

“She’s a stubborn, bad horse!” a new Leadership U student muttered as he sat anxiously on his horse with tears in his eyes. “She won’t listen. I quit!”

Riding up, fifteen-year-old James,* encourages the new rider saying, “Don’t give up, you can do this. Yelling isn’t going to do anything. Show her how. You have to be the leader. You have to make a believer out of her!”

James knows. When he first got on a horse just like when he first came to Show-Me, he felt just as lost and hopeless. The unfamiliar setting left him feeling anxious, scared, and wanting to give up. Luckily, his Show-Me family helped encourage and guide him. Using many of the same techniques he is learning in the Leadership U program, James has been able to face and overcome obstacles of his past and prepare for the challenges of his future.

God provides the ultimate example of leadership in his son, Jesus. The best way to equip a young person to live as a successful, independent adult: teach them to lead like Jesus. To lead like Jesus, a leader must develop the heart and character to serve. Only then can trust be built that compels change, not demands it, and inspires other to follow.

Modeling this kind of leadership is at the heart of every aspect of Show-Me. “Leadership U is a practical, “incubator” where our young people can put to the test everything they learn in school, church, and counseling to develop confidence, leadership, and healthy relationship skills,” explains Director Chad Puckett. “It gets our kids out of their comfort zones and gives them opportunities to do things they never believed possible.”

The program teaches that the first objective to accomplish the “impossible” is to break it down into a series of smaller, achievable steps using the core principles of Leadership U. Service is the root of Christ-like leadership. Through actions, the leader signifies to the follower that “I am here for you, not me.” Next, the leader must equip themselves with the knowledge – basic information and skills – needed to complete the task. Persistently refining that knowledge day-by-day develops the work ethic, attitude, and character required to build confidence to lead through future challenges. Displaying that wisdom inspires the follower to believe in the leader’s ability. 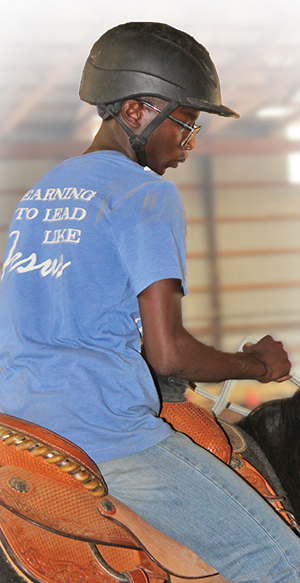 “Working with the animals opened the kids’ hearts to receive instruction,” stated Nathan Smith, the program’s creator and coordinator. “When they see how your advice makes the horse do things they never thought possible, they begin to trust and are willing to listen to what you have to say about horses, life, and even God.”

Leadership U’s hands-on model of training horses and dogs has been especially effective in helping at-risk children like James. Utilizing the emotional connection with animals provides a healing environment that lowers defensive barriers. The class’ physical activity gives a way to work out some energy. Seeing how the animals reflect his own emotions has made him more aware of his need to control his own. “I know that if I want my horse to be calm, I have to be calm,” James explained.

Being responsible for the animals, kids experience from the caregiver’s perspective the importance of obedience and discipline. These concepts take on a new understanding. When applied in their own life, rules and routines seem restrictive and controlling. Now, they understand them as necessary to reach one’s fullest potential.

When you ask a teenager why they did something, they will likely say, “I don’t know…because I felt like it.” A teenager is a lot like a horse: impulsive, defiant, and emotional. Many times, they “feel” more than they “think.” Part of the reason stems from the make-up of their brains.

A human’s brain will not fully develop until they are 25-years-old. The prefrontal cortex is immature in a teenager; horses have none at all. This is the “thinking” part of the brain that performs reasoning, judgment, and impulse control functions. Until the brain fully matures, the teenage mind relies on the amygdala to make decisions and solve problems. This is the “emotional” part of the brain responsible for immediate “gut” reactions including fear and aggressive behavior. Horses have an extra-large amygdala to alert them and react to threats. When the amygdala is triggered, the brain shuts down its thinking side and immediately goes into “fight” or “flight” mode.

For children who have experienced trauma, this reflex is magnified. This is why direct approaches with teenagers rarely work and usually end in confrontation. The emotional bombardment either causes them to shut down or fight back verbally. They react emotionally, and do not think rationally.

This unconscious defense mechanism, combined with unresolved trauma from his past, created trouble at home and school for James. “If you challenged him, he would get defensive,” stated Jeff Eades, James’s housedad of five years. “He would always have an answer and it was never his fault.” Both parent and teen were left frustrated and nowhere closer to solving the problem. Using the  understanding of the mind’s wiring, Leadership U uses a five-step process to learn how to overcome obstacles (see chart on left).

The Problem with Pages

James’s obstacle was his struggle with reading. School frustrations spilled over to anger and outbursts at home. In his head, he read over words so quickly that by the time he got to the end of the page, he had no clue what he was reading. If he didn’t know a word, he would come to halt. Both issues led him to act out to avoid feeling like a failure.

To help James, the Eades applied many of the steps of the Leadership U process. First, they made reading a positive thing, not just a school task. They had him read for fun in subjects that interested him. Second, they worked to reprogram his negative reaction to avoid reading by redirecting him. When he became restless and frustrated, they did not fight or argue. They had him get up and do something physical like walk the dog or go running. Getting that energy out helped him to focus. Third, they had him read out loud. Saying each word helped slow him down enough to hear and comprehend the story. Jeff remembers how the results could be seen by the size of James’s smile when he saw his reading test score. “100%! How is that possible!?!” James said proudly.

Trust Built on a History of Victories

James’s victory with reading has led to improvement in school and a reduction of fights at home. Yet, like all of us, he will face challenges in his future. Whether on a horse or in the classroom, or eventually in a job or a relationship, each obstacle he overcomes grows his confidence and makes the next obstacle seem less daunting. By “Learning to lead like Jesus,” James is learning to believe – in himself, his future, and God.